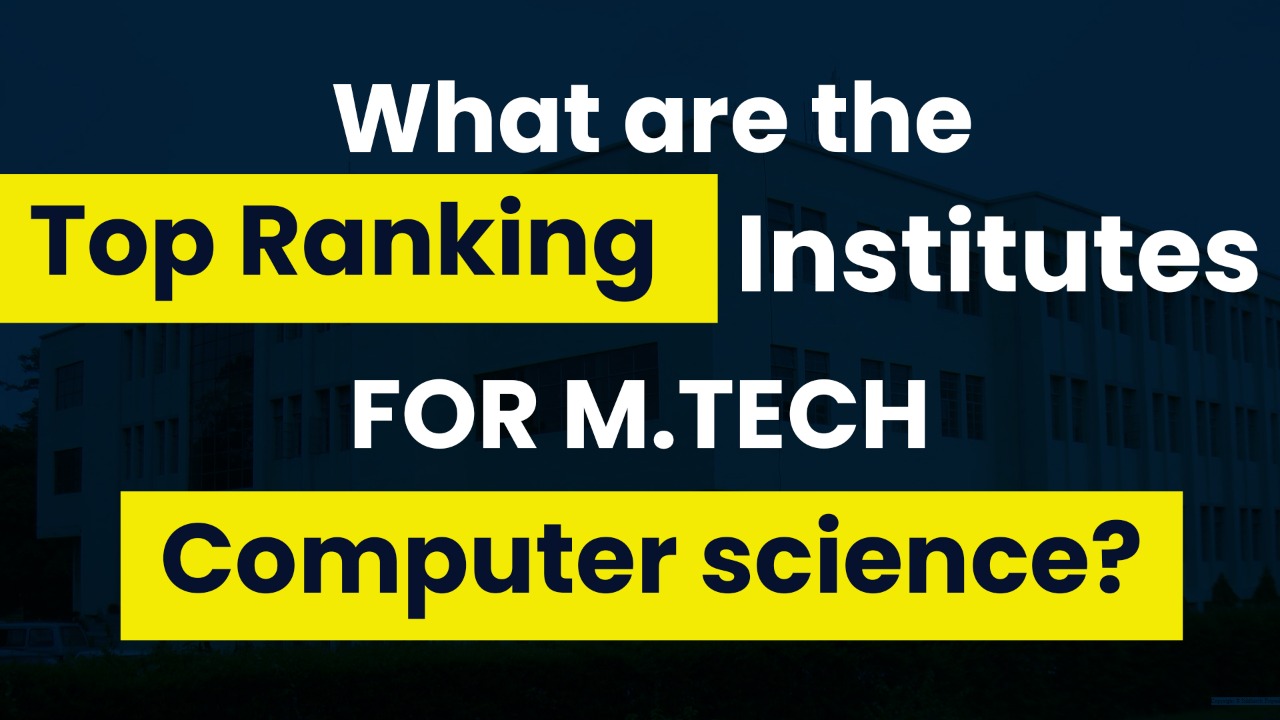 What are the Top Ranking Institutes for M.Tech Computer science?

Here are the top ranking institutes for M.Tech Computer Science:-

IIT Madras was founded in 1959 in collaboration with the Government of the Federal Republic of Germany and is one of the best and oldest IITs. It is spread across a beautiful campus of 617 acres. It gives education in basic and applied research and advanced technology. It awards various degrees like the Bachelor of Technology, Master of Technology, and Master of Science in various subjects of engineering.

One of the Best computer science colleges in India is the Indian Institute of Technology, Mumbai. It was ranked number 172 according to the World QS Rankings 2021. It is one of the oldest and most prestigious institutions globally, with an impressive list of alumni. The infrastructure has been developed over the years keeping in mind the students’ requirements, and the syllabus has been adapted to keep in the picture all of the industrial needs. The vibrant atmosphere, student clubs and associations, campus and the excellent faculty are all important factors that are responsible for the high ranking of the college.

IIT Delhi is an autonomous institute established in 1961 and was inaugurated by Prof. Humayun Kabir. It was the 4th IIT established by the Government of India and is spread across 325 acres of campus. It offers courses across 11 disciplines providing research, undergraduate, and postgraduate degrees. The institute stands out from the other IIT institutes due to the new and unconventional courses offered by them. It was awarded the Institute of Eminence status in the year 2018.

IIT Kharagpur was established on 18th August 1951 and is the oldest IIT in India. There was a lot of investment from foreign in the setting of this institute. It was inaugurated by Maulana Abul Kalam Azad. It offers degrees across 18 disciplines. Besides academics, it also promotes healthy living. Its motto is “Yogah Karmasu Kaushalam” which means, “Yoga is Excellence at Work”.

Admission Process:- M.Tech admissions are on the basis of GATE score.

IIT Kanpur is one of the most prominent institutes in India that provides world-class education. It was established in the year 1959 and has made a record for consecutive 100% placement which is first amongst any colleges in India. It was also the first institute to give knowledge of Computer Science.

Mode of Admission:- Admission to M.Tech courses is on the basis of a valid GATE score.

This college has a long history and is the oldest engineering college in the history of India. It was established in the year 1847 by Lord Dalhousie and was known as the Thomason College of Civil Engineering. Later, in 1949, it was renamed to the University of Roorkee. It became the 7th IIT of India in the year 2001. It offers programs in 21 disciplines and is famous for its dominant entrepreneurial culture. It is also famous for its 10 alumni who won the Padma awards and 25 alumni who won the Shanti Swarup Bhatnagar Prize for Science and Technology.

Mode of Admission:- The M.Tech admissions are on the basis of a valid GATE score.

IIT Guwahati is the only institution in the North Eastern part of India and it plays a major role in bringing education to the people of this deprived area. It was established in 1994. It spreads across 285 hectares and has the most beautiful college campus in India. The placement is increasing every year due to the quality of teaching and education given to the students. The institute has 3 interdisciplinary academic centers and 11 departments.

Mode of Admission:- Candidates must possess a valid score in GATE for M.Tech and Integrated M.Tech courses.

IIT Hyderabad was founded in the year 2008 and its foundation was laid by UPA Chairperson Mrs. Sonia Gandhi. It was set up with technical and financial help from the Government of Japan. The campus is spread across 576 acres of land. It offers some of the best laboratories and infrastructure in the country. It offers both B.Tech and M.Tech courses in 10 disciplines of engineering and research. It also offers a Ph.D. in all disciplines of engineering.

Mode of Admission:- Admission to M.Tech is through a valid score of GATE.

The International Institute of Information Technology Bangalore, a deemed to be university, was established in 1999 with a vision to contribute to the IT world through education and research, entrepreneurship and innovation. More than 3,000 students have graduated from the institute since its inception, and serve in over 50 well-known IT product and services companies. The institute attracts students from all over India and abroad and has the unique distinction of selecting 100% students on merit from across the country and abroad, pushing up the level of discourse and peer group at the institute. The institute has been ranked 56th in the Engineering category in the country in National Institutional Ranking Framework 2018 by the Ministry of Human Resources Development, Government of India.

This institute has 16 departments that cater to the various areas of engineering and applied sciences. Last year the institute celebrated its golden jubilee. The institute has a line of illustrious alumni to its credit and some of them are CEOs of Fortune 500 companies.