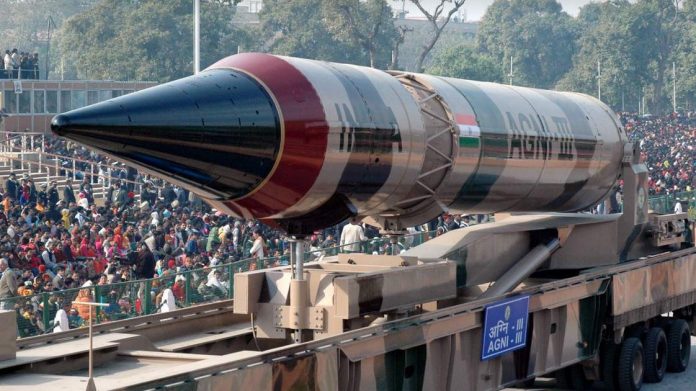 Agni-III, a long-range surface-to-surface ballistic missile, has failed its first night test. The test was carried out at the Integrated Test Range at APJ Abdul Kalam Island near Odisha coast.

• The Agni-III missile fell into the ocean after the first stage split.• In the initial flight, the missile covered a distance of 115 km, but soon it deviated from its path.• According to preliminary investigations, the missile lost its way due to a construction flaw.• The test was conducted as a user trial for the Indian Army. The trajectory for this missile test was fixed at 2800 km.

• The missile has been developed by the Defence Research and Development Organization (DRDO).

• This missile was inducted into the Indian Armed Forces in 2011. This missile covers all major cities of China and Pakistan.

• This missile uses solid propellant in two stages. It is capable of carrying conventional and nuclear warheads.

• This missile is capable of carrying weapons of up to 1.5 tons.

• The missile has a height of 17 meters, while its weight is about 50 tons.

• It can be fired through a mobile launcher that makes it more effective.